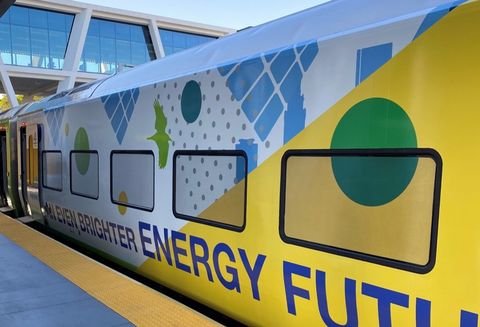 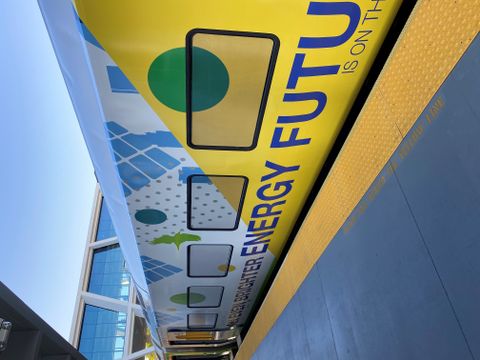 MIAMI, Fla. (January 31, 2020) - Brightline, the privately funded passenger rail system designed to reinvent travel and take cars off the road, announced today that its five-train fleet will run carbon neutral for the month of February.  Throughout the month of February, thanks to Brightline's ongoing energy partner Florida Power & Light Company (FPL), all Brightline carbon emissions will be offset with renewable energy credits (RECs). To celebrate this carbon-free month milestone beginning Super Bowl LIV weekend, FPL has wrapped a Brightline train to illustrate the joint commitment to green initiatives.

“Traveling by train is an easy way to be a steward of the environment as it simply takes cars off the road,” said Patrick Goddard, president of Brightline. “With over 150,000 out-of-state visitors for the Super Bowl, added to Florida's most congested region, Brightline and FPL are proud to eliminate our carbon footprint for February and reduce congestion.”

From its inception, Brightline has been committed to implementing green initiatives across the company and through its strategic partnership with FPL, its trains are fueled by clean biodiesel in South Florida.  Further, Brightline's train sets meet the highest emissions standards, Tier 4, set by the United States Environmental Protection Agency (EPA). Each trainset is powered by Siemens Charger locomotives equipped with a projected consumption of two gallons of fuel per mile. The Fort Lauderdale and West Palm Beach Brightline stations feature FPL SolarNow trees, and a solar canopy is planned for Virgin MiamiCentral station that will generate clean, renewable energy for the grid and shade for guests.  Additionally, Electric Vehicle (EV) charging stations are also available at all Brightline station garages.

“Given our shared commitment to building a more sustainable and resilient state, FPL's ongoing partnership with Brightline is a no-brainer and a big win for South Florida,” said FPL President and CEO Eric Silagy. “Football fans from across the country and from around the world will be some of the first to enjoy carbon-free rides to and from downtown Miami. Along with FPL's bold plan to install 30 million solar panels by 2030 and numerous other innovative projects, this is yet another way to showcase to the world that Florida is at the forefront of advancing affordable clean energy now and for the future.”

From January 30 - February 1, 2020, FPL will be hosting a Solar Football Activation in the Smart Lounge of Virgin MiamiCentral. Travelers are invited to throw a football in the FPL Solar Field for a chance to win prizes.

Brightline, soon to be Virgin Trains, is planning its expansion to connect Las Vegas to Southern California and will feature all-electric train sets.  Construction is slated to begin later this year.

For more information about Brightline and its service during the Super Bowl, including the Big Game Survival Kit with 10 one-way tickets, as well as late-night train service, and shuttles to the Big Game, visit   www.gobrightline.com.

Brightline is the first privately funded passenger rail system in America in over a century. Brightline is designed to reinvent travel and take cars off the road by connecting city pairs and congested corridors that are too close to fly and too long to drive. Providing fast, efficient, hospitality-driven transportation featuring the latest in customer-friendly amenities, Brightline currently operates in Florida between Miami, Fort Lauderdale and West Palm Beach, with plans to expand to Orlando, Boca Raton, Aventura and PortMiami. The company is also on track to break ground between Las Vegas and Southern California in 2020.

Florida Power & Light Company is the largest energy company in the United States as measured by retail electricity produced and sold, serving more than 5 million customer accounts or an estimated 10 million+ people across the state of Florida. FPL's typical 1,000-kWh residential customer bill is approximately 30% lower than the latest national average and among the lowest in the U.S. FPL's service reliability is better than 99.98%, and its highly fuel-efficient power plant fleet is one of the cleanest among all electric companies nationwide. The company was recognized in 2018 as one of the most trusted U.S. electric utilities by Market Strategies International for the fifth consecutive year. A leading Florida employer with approximately 9,100 employees, FPL is a subsidiary of Juno Beach, Florida-based NextEra Energy, Inc. (NYSE: NEE), a clean energy company widely recognized for its efforts in sustainability, ethics and diversity, and has been ranked No. 1 in the electric and gas utilities industry in Fortune's 2019 list of “World's Most Admired Companies.” NextEra Energy is also the parent company of Gulf Power Company, which serves more than 460,000 customers in eight counties throughout Northwest Florida, and NextEra Energy Resources, LLC, which, together with its affiliated entities, is the world's largest generator of renewable energy from the wind and sun and a world leader in battery storage. For more information about NextEra Energy companies, visit these websites: www.NextEraEnergy.com, www.FPL.com, www.GulfPower.com, www.NextEraEnergyResources.com.