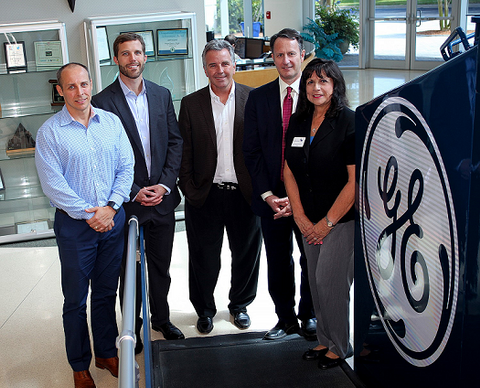 Miami – April 15, 2015 – All Aboard Florida (AAF) has selected GE Transportation's signaling business to design and manufacture signaling equipment for the entire length of the 235-mile rail corridor connecting Miami and Orlando. The landmark passenger-rail project, the first privately owned and operated project of its kind in the United States, is scheduled to begin initial service from Miami to West Pam Beach in late 2016.

All Aboard Florida is investing $1.5 billion to improve existing railway, and, where needed, build new track in advance of launching its service. GE Transportation will perform a critical component of this work by providing a signaling system that includes upgrades to grade crossings in the corridor, effective communications with approaching trains, a system for triggering gate openings and closings, and regulation of train-crossing times. As a result, All Aboard Florida's trains will clear grade crossings in less than 60 seconds, less time than vehicles stop for a traffic light. GE's communications-and-engineering enhancements will be fully integrated into the service's corridor-wide Positive Train Control system. These improvements build on a safety system in place now for existing trains operated by affiliate Florida East Coast Railway, which worked closely with AAF in this selection process..

“This project introduces advanced communications and engineering improvements in an existing rail corridor that wouldn't be possible without the investment from this project,” said All Aboard Florida President Mike Reininger. “It's significant that we're awarding our first major infrastructure contract for the project to GE. It should attest to how highly we prioritize safety in the corridor.”

Teams at GE Transportation's Melbourne and Jacksonville, Fla., facilities will take the lead on signal design and engineering. A second GE plant in Warrensburg, Mo., will manufacture the equipment.

“GE's commitment is to deliver safe, efficient solutions to optimize All Aboard Florida's mass-transit operations,” said John Reinker, president of Intelligent Transportation Solutions at GE Transportation. “We're thrilled to have won the confidence of the company. This is an important project that we believe may influence other private-transportation projects across the United States.”

Once service is inaugurated, All Aboard Florida will connect Florida's two most popular travel destinations in less than 3 hours. Its express trains will traverse South and Central Florida, making intermediate stops in Fort Lauderdale and West Palm Beach. Construction has already started at both stations, as well as at MiamiCentral in downtown Miami and Orlando International Airport in Orlando. The new rail service is expected to remove approximately 3 million vehicles from the region's highways.

About All Aboard Florida

All Aboard Florida is an inter-city passenger-rail project being developed by Florida East Coast Industries, LLC (FECI), the owner of Florida's premier passenger-rail corridor. The service will connect Miami to Orlando with stops in Fort Lauderdale and West Palm Beach. It will also provide Floridians and visitors with a viable transportation alternative to congested highways and airports, and deliver a high‐quality onboard experience for passengers. All Aboard Florida will be the first privately owned, operated, and maintained passenger rail system in the United States. For more information, visit www.AllAboardFlorida.com.

As a division of General Electric Company, GE Transportation is a global technology leader and supplier to the railroad, mining, marine, stationary power and drilling industries. We drive change and progress—by rail and across oceans. We go farther and dig deeper, with advanced technology that connects people, data and machines, so resources can be gathered, goods can be transported and economies can thrive. At GE Transportation, we set potential in motion.