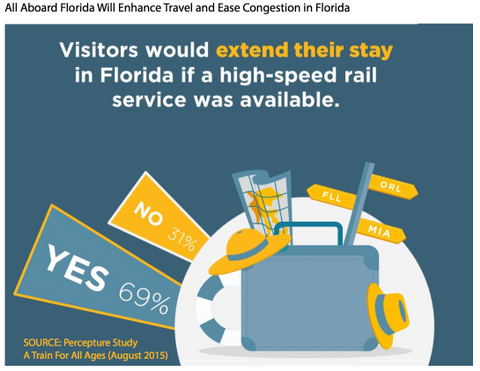 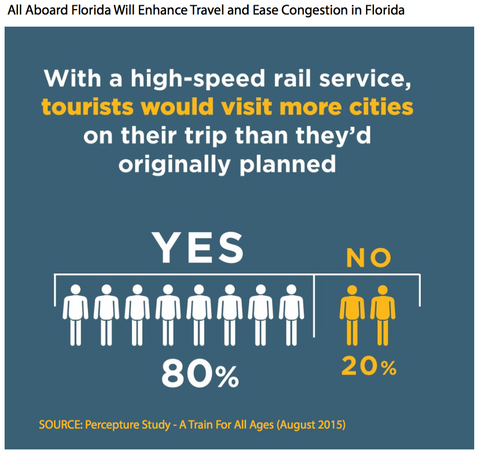 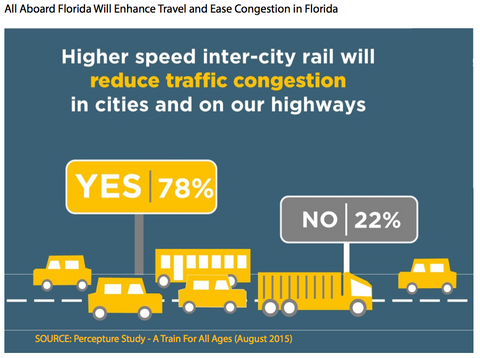 People vacationing in Florida would explore more of the state if they could travel more easily and quickly between Central and South Florida by high-speed rail, according to a recent study conducted by New York-based marketing communications agency Percepture.

Last month, Percepture conducted a major online, cloud-based survey via SurveyMonkey on potential Florida visitors' perceptions and views on intercity passenger-rail travel and high-speed rail travel in the United States. The survey, "A Train For All Ages,” polled 2,240 qualified online responders. Participants were adults between 18 and 80 years old who had previously traveled to Florida on vacation.

Asked if a high-speed train service connecting Orlando and Miami, with stops in West Palm Beach and Fort Lauderdale, would encourage them to visit more cities than they originally planned, an overwhelming 80% said “yes.” Other findings were also tourism-friendly:

Approximately 50 million people travel today between Orlando and Miami each year, 95% by car. This gridlock is likely to greatly ease in 2017, when All Aboard Florida, high-speed intercity passenger-rail service, launched operations between the two cities, with stops in West Palm Beach and Fort Lauderdale, in less than three hours. It is estimated that the privately-owned- and operated rail service will remove up to 3 million vehicles from Florida's highways yearly.

“All Aboard Florida is a game-changer for us,” said William D. Talbert, III, CDME, President and CEO of the Greater Miami Convention and Visitors Bureau. “Many of our visitors, especially international visitors, are accustomed to high-speed rail travel and will consider the new All Aboard Florida service an excellent reason to expand their itineraries, extend their stays and explore more of Florida.”

“Visitors and residents will soon have an easier and more convenient way to see our cities and state,” said George Aguel, President and CEO of Visit Florida, “and Florida will have a world- class rail service that will make it even more desirable as a destination and place to live.”

SurveyMonkey is a U.S.-based survey company with more than 25 million users that conducts more than 90 million surveys monthly. This study targeted the New England, Middle-Atlantic States, Northeast, Southeast (not including Florida) and Texas markets—all major tourism markets for Florida.